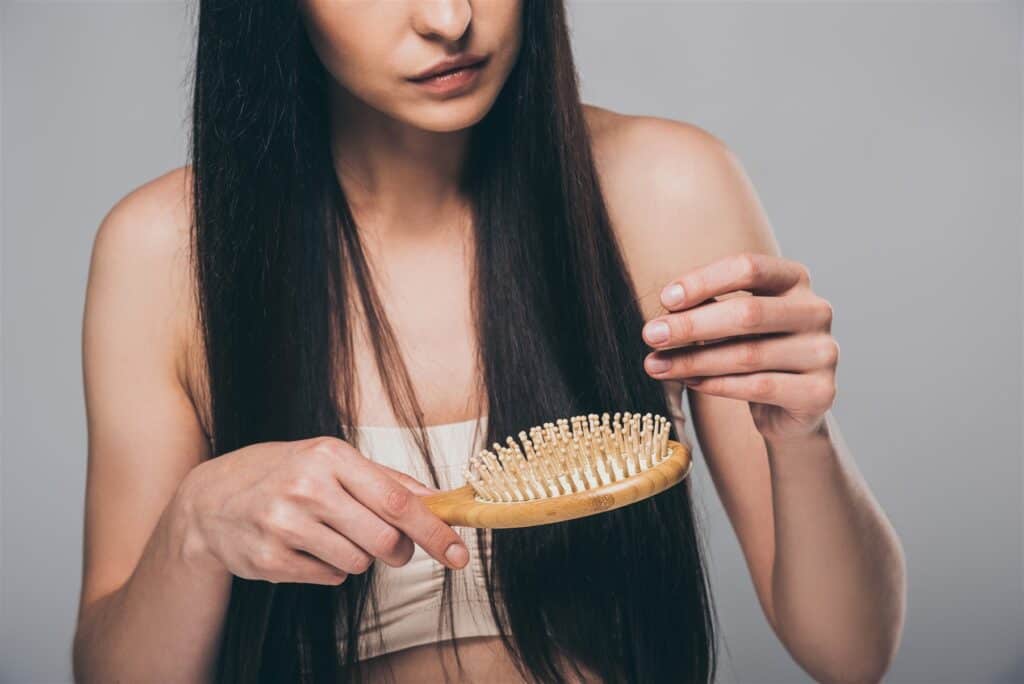 Are you experiencing hair loss as well as fatigue? And you are a woman. Well, the three things have a connection. A mineral connection. That mineral is iron. Let’s dig deeper, shall we…

In this article we will see:

Do you know who made spinach – the vegetable – famous?

The name that usually pops in the head is Popeye the Sailor, a cartoon character. You must have watched him guzzle a can of spinach and instantly grow enormous muscles. He then uses his strength to pummel his opponent.

Interestingly, Popeye is credited with boosting American spinach consumption by 33%. But why did Popeye choose spinach and not any other vegetable?

Because of the huge amounts of iron in spinach – that is what the cartoon makers knew. But Popeye’s obsession for spinach was born due to a printing error. In 1870, a German chemist was researching the nutritional benefits of spinach. When writing his findings, he misplaced a decimal point, making the iron content in spinach 10 times higher. While there are 3.5mg of iron in a 100 grams serving of spinach, that number became 35mg.

The error came to light in 1937, but by then spinach was already the star vegetable. Even today, spinach is acclaimed to be one of the most iron-rich vegetables. Of course, spinach is a good source of iron, along with many other foods like beans, lentils and raisins. Had it not been for that little error, spinach wouldn’t be so popular. It got lucky.

However, the point remains that spinach got famous because of iron. And iron is essential for our body. Of course, gulping down foods containing iron won’t instantly build muscles, as you see in the cartoon, but eating iron-rich foods will keep you energised and your brain sharp. And it will also give you glowing skin and strong, shiny hair.

Why Do You Need Iron?

The colour of our blood is red. That’s because it contains abundant amounts of cells called red blood cells. These consists mainly of haemoglobin – we all know or have heard of it. Haemoglobin is the iron-containing protein that gives the red blood cells and hence the blood its red colour. But haemoglobin is not there to paint the blood red. It picks up oxygen as we breathe in through the lungs. After which, the heart circulates the oxygenated blood to each and every cell of our body.

So why do our cells need oxygen? Well, it helps the cells convert stored food to a usable form of energy called ATP. ATP is like fuel for our cells. Just like the car needs petrol or electricity these days, our cells need ATP to carry out key tasks such as growth and repair of tissues, powering muscles, pumping heart etc. Without enough ATPs, our cells won’t function as effectively.

Now, if you are wondering what’s iron go to do with all this? Let’s do a quick recap. Iron is an essential component of Haemoglobin that carries oxygen to all parts of the body. Oxygen helps our cell generate fuel (ATP), so they can carry out their function. If you don’t have enough iron, your body doesn’t get enough oxygen. Therefore tiredness and fatigue are some of the early signs of low iron.

It’s especially seen in women of childbearing age (premenopausal). For the obvious reason that they lose blood (and therefore iron) every month during menstruation. Also, if you are pregnant, you share your iron with the foetus. So it’s usually the fairer sex who are deficient in iron.

Iron deficiency may also occur in men and postmenopausal women as a result of malabsorption problems such as celiac disease. Taking medicines that reduce stomach acid (e.g. ranitidine) can also prevent body from absorbing iron.

Besides, young children and adolescents are at risk of iron deficiency due to their rapid growth rate (and increase in iron requirement).

What are the Signs and Symptoms of Iron Deficiency

Our body is designed to store vitamins and minerals, just in case there’s nutritional shortage for whatever reason. The stock of extra iron is stored in liver and bone marrow.

Dwindling iron stores give no flashing lights. It may go unnoticed for a long time until iron deficiency anaemia develops. When this happens, haemoglobin level start falling and less oxygen reach your tissues. So your body is deprived of the energy it needs to function. Some common signs and symptoms that you will notice are:

Other symptoms include sore tongue, irritability, difficulty to concentrate and pounding or fast beating heart. In some people there’s also a craving to eat non-foods items like dirt, ice, chalk and paper. This condition is called pica.

Hair Loss Can Also Be A Sign Of Low Iron Stores

While low haemoglobin and therefore less supply of oxygen to hair cells can cause hair loss. Many dermatologists think that being low on iron stores, even without anaemia, can lead to hair loss. What remains unclear is what degree of iron deficiency may contribute to hair loss.

Also, the type of hair loss due to iron deficiency can vary. The most commonly seen is telogen effluvium – an increased shedding from all over the scalp. Other types of hair loss that occur due to low levels of iron are alopecia areata and female pattern hair loss – thinning hair on the top and front of the head (1).

Why Does Dwindling Stock of Iron Cause Hair Loss

Hair follicle cells are one of the most rapidly dividing cells in the body. And dividing cells require higher levels of iron. So it’s believed that drop in iron levels may impair the growth of hair follicles, thus affecting the hair growth cycle (2).

Moreover, researchers in this area also think that lower iron levels decrease the threshold for developing different types of hair loss. What this means is that if you have a family history and genetic predisposition to getting female pattern hair loss or alopecia areata, then it is possible that having lower levels of iron may trigger these hair loss conditions (2).

Several research studies have evaluated the link between iron deficiency and hair loss. But the jury is still out on this.

Almost all of these studies have focused on women, and some suggest that decreased iron stores, with or without anaemia, may cause hair loss, while others have challenged this view (3).

At this time, there’s not enough evidence to make iron deficiency screening a routine procedure for people with hair loss (4). Or even to treat iron deficiency without anaemia. Nevertheless, dermatologists and researchers from Cleveland Clinic, Ohio, suggest that treating iron deficiency – even in the absence of anaemia – can enhance the person’s ability to regrow hair. They further add that whatever the cause of hair loss, having too little iron in the blood makes it worse (5).

How Do You Know If You Have Iron Deficiency (vs. Anemia)

How do you find out? Testing your haemoglobin levels will tell you if you have iron deficiency anaemia or not. And to check for low iron stores or iron deficiency, you need to do a serum ferritin test.

The serum ferritin is the standard test to check total body iron stores. As a general rule, the less ferritin in the blood, the less iron a body has stored up. The proposed optimal ferritin level for hair regrowth is 50ng/L, but some shoot for 70 ng/L (1).

What next? You find out you have iron deficiency. And Iron deficiency must be treated not just for stronger hair, but for your overall health and well-being. How do you treat iron deficiency? We will look at various ways to up your iron levels next time…

I would like to hear from you… Have you experienced hair loss due to iron deficiency? Let me know in the comment box below…